Fiddleheads remind me of my family old time favourite food, Gulai Pakis. Gulai is an Indonesian curry base. When I was a kid, I gave these greens special name “sayur belalai gajah”. Sayur means vegetable, belalai means trunk and gajah means elephant. So, literally translated for that is Elephant Trunk Vegetable. What a weird name I gave!

Fiddleheads or what the Indonesian calls for paku or pakis are seasonal and only available for two weeks at North America’s market. I only have them once a year since I moved to Canada. Additionally, it is not all stores sell fiddleheads.

When the first time, I had fiddleheads here, I was quite surprised on how big they are compare to the ones that I used to have in Indonesia.   Then, I posted a picture of fresh fiddleaheads on my facebook one day. Farina whom is originally from Malaysia was telling me “these look like the paku that is only available in East Malaysia (Sabah/Sarawak). In West Malaysia, they’re skinny.”

Gotcha! It was explained my question about the size. I resided in the west part of Indonesia at that time, so that is why I only knew the skinny ones.

I often received the same question about where I bought my fiddleheads in Winnipeg. My first year of buying them was at Organza and I created them into stir fry fiddleheads with scrambled eggs. The second year was at Crampton’s and made them for my old time  family favourite, gulai pakis (Minang Fiddleheads Curry). This year is third time and I bought them at the Vita Health (the Osborne Village store). So, here is the list of places that I’ve known sell fiddleheads in Winnipeg: 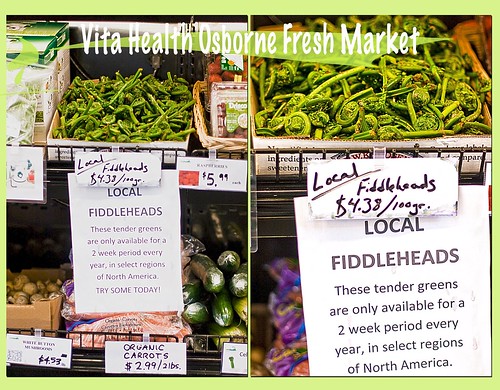 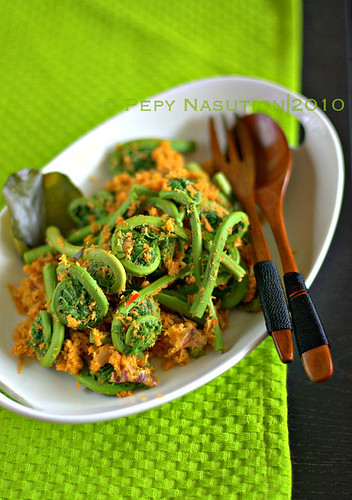 Directions:
1. With a mortar and pestle, grind coriander, dried shrimp and cayenne pepper.

2. Combine the ground ingredients with coconut, shallots, lemongrass, kaffir lime leaves and salt. Toast in a medium-hot pan until the liquid evaporates. Set aside.

3. In a salted boiling water, blanch fiddleheads about 2 – 3 minutes, drain and run under cold water to preserve the green colour. Re-drain.

4. In a bowl, combine blanched fiddlheads with the toasted coconut mixture. Place in a serving plate and drizzle kaffir lime over.

Notes:
Anyang can be made with any vegetables that you like, North Sumatrans also love to add torch ginger flower (also known as bunga kecombrang, kincung, rias, honje or bongkot)