For people who grew up with Sumatran culinary (just like myself), fiddlehead ferns might not be extraneous. They are what the Indonesians call for pakis or paku. I grew up with several kinds of Sumatran gulais (curries), one of them was gulai pakis or gulai paku. Some people also make them for anyang (Acehnese/Minangese salad with spiced grated coconut).

I just knew from one of my foodie fellow on multiply that people who grew up in Kalimantan, also familiar with fiddlehead ferns, since the plant grow wild in the forest. In Pontianak (the capital of West Kalimantan province), people eat them as salad with peanut and fish/shrimp paste (Indonesian: petis) sauce, and also stir fry with dried shrimp paste (Indonesian: terasi, Malaysian: belachan).

I was so exciting to find fiddlehead ferns for purchased in Winnipeg, since I heard from the news that wild fiddlehead ferns are sold in several stores. According wikipedia, fiddlehead ferns have several varieties depend on where they grow. The ones that I had here, grew local and wild. They are different with I used to have when I was in Indonesia.

Fiddlehead ferns refers to the unfurled fronds of a young fern harvested for food consumption. The fiddlehead, or circinate vernation, unrolls as the fern matures and grows due to more growth in the inside of the curl.

If you notice, there is no pepy’s name on this picture, due to the height issue, I couldn’t take a picture of fiddlehead in the basket at the natural food store. Here is a picture of Manitoban Wild Fiddlehead Ferns, that was taken by my husband. 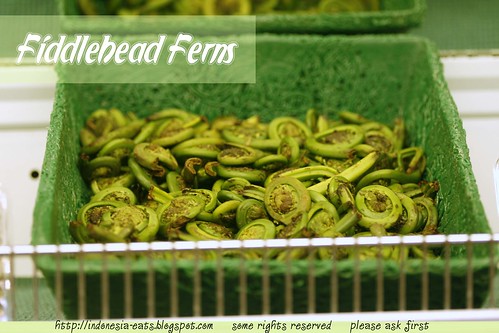 Last night, I didn’t feel to process/grind some spices to make gulai pakis, so I decided to make an easy one. I was thinking to make fiddlehead ferns omelette as I saw the recipe on the Food TV Canada website, but it was happened I changed my mind to make stir fry.

This post is also my entry for Weekend Herb Blogging (WHB) this week, hosted by Joanna of Joanna’s Food.

Indonesian Stir Fry Fiddleheads with Scrambled Eggs
recipe by me 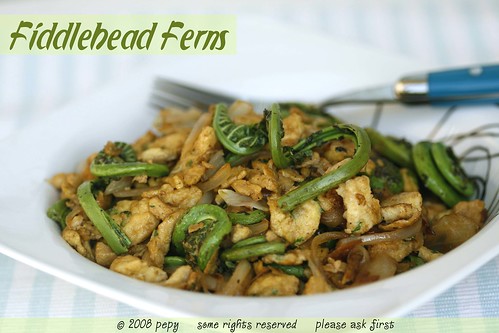 2. As mixture begins to set, gently move spatula across bottom and sides of skillet to form large, soft curds. Cook until eggs are thickened and no visible liquid egg remains, but they are still moist. Set aside.

Stir Fry Fiddleheads
1. In a saucepan of boiling salted water, blanch the fiddleheads for 2 minutes. Drain and rinse in cold water. Set aside.