I got a bag of apples and didn’t know what to do, too many recipes out there.  Apple sauce, apple pie, chicken apple, you name it!

Then, when I stopped by at Hyundae mart, I found a great deal on roasted buckwheat (kasha) and beans.  Beside buying more miso, I grabbed some beans and kashas.  Hyundae mart used to be a Kosher food grocer,  I guess the Korean took over the management, changed the name and added more Korean and Japanese products.

Thanks to Irma for her Eid goodies that was sent from Germany.  I have few packages of almond flavour to boost my baking.

The mix of almond flour and buckwheat is used to substitute  the oat which contains gluten. 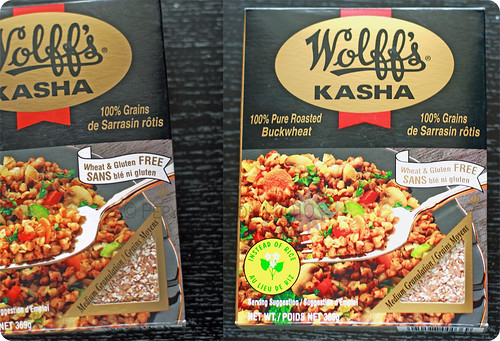 Mix the sugar, buckwheat, almond flour and salt in a bowl. Add the cold diced butter and work it into the flour until a crumb forms and small pieces of butter remain.

In small ramekins or a pie dish, add apple mixture and top with buckwheat and almond crumble.

Bake at 350F for about 30 minutes or until fruit starts to bubble over. If the crumble turns dark before the fruit is bubbling, cover with aluminum foil.

The rest of the unused crumble may be frozen until next time.

*Almond flavor can be used interchangeably with vanilla pods, powder or flavor. Almond flour can be substituted for soy flour.