Each kecap manis producer has its own secret recipe.  Through my searching, some recipes call for lemongrass and kaffir lime leaves, some don’t.  You may be interested with a lovely post of sijeleng on how to make traditional kecap manis in Kediri, East Java.

A word kecap, allegedly taken from the language or the Amoy dialect kôechiap tsiap.  Amoy (Xiamen) is a Hokkien dialect which originally comes from Southern Fujian province (in Southeast China), in the area centered around the city of Xiamen. It is highly similar to Taiwanese, and is widely known as Hokkien in Southeast Asia.

I literally have influenced bulé husband with kecap manis. He said that kecap manis is one of his happy sauces.  In Winnipeg, kecap manis of ABC brand is sold at most Asian markets and  any Superstores (large Canadian grocery chains).  As an Indonesian, I love Bango brand more than ABC, but bango was not widely sold in Winnipeg.   I sometimes got the Bango brand  from Vancouver or whenever my husband went down to Minneapolis, US.

Since the mixture has been added with coconut/palm sugar, kecap manis does not require a refrigeration to store it. Keep it in your cupboard. The sugar itself is a natural preservative.

Guess what? In early 2010, there was a new Asian store (it is a branch from Alberta) open, Lucky.  It carries my fave kecap manis.  Now, I can get Bango in Winnipeg.  Honestly, I was dancing in the store when I saw it for the first time. OMG, I feel ashamed whenever I remember it!!!

Another thing that I’d like to share, Bango brand is GLUTEN FREE*.  For you who have problem with gluten or celiac disease, this brand is good for you.  By saying much good things about Bango, I want to make it clear, I don’t get paid from Unilever Indonesia which produces this kecap manis.  I just write what I like about.

*Other brands add wheat flour to thicken their kecap manis* This explanation was added on Sepetember 8, 2010 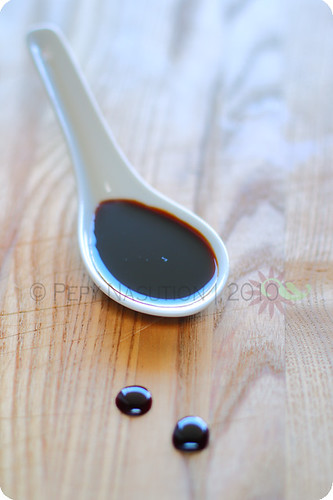 What is kecap manis for? Kecap manis can be for a dipping sauce, any stir fry dishes (including nasi goreng, bakmi and bihun), Indonesian style steak (known as bistek/bistik), glazing my BBQ dishes such as for sate (chicken, beef, fish, shrimp etc), for rujak (Indonesian fruit salad) and many other uses.  I love to mix kecap manis with chili and shallot slices, then drizzle with a bit lime; preferably nasnaran mandarin (jeruk limo/sambal) or calamansi.

Ooo there is another use.  The Indonesians love to mix kecap manis and lime for a cough remedy.

* bulé is a slang term for Caucasian in bahasa Indonesia.