I will not ask this question to Indonesians, because Indonesians know about their tempeh very well. Has anybody ever heard about tempeh before? I copied 1 paragraph about tempeh and 3 paragraphs how to produce it from wikipedia. 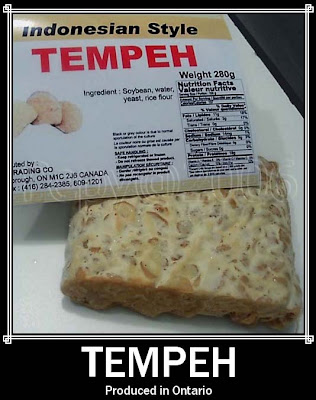 Tempeh, a staple source of protein in Indonesia for several hundred years already, is made by a natural culturing and controlled fermentation process that binds soybean particles into a cake form. It is originated from Indonesia, where it is most popular, especially on the island of Java (where it is a staple), although it is common in other parts of Southeast Asia as well. It’s a kind like tofu, tempeh is made from soybeans, but tempeh is a whole soybean product with different nutritional characteristics, textural qualities and need to be fermented in special conditions. Tempeh’s fermentation process and its retention of the whole bean give it a higher content of protein, dietary fiber and vitamins compared to tofu, as well as firmer texture and stronger flavor. Because of its nutritional value, tempeh is used worldwide in vegetarian cuisine; some consider it to be a meat analogue.

Tempeh begins with whole soybeans, which are softened by soaking and dehulled, then partly cooked. Specialty tempehs may be made from other types of beans, wheat, or may include a mixture of beans and whole grains.

A mild acidulent, usually vinegar, may be added and a culture containing the spores of fungus Rhizopus oligosporus is then mixed in. The beans are spread into a thin layer and are allowed to ferment for approximately 24 hours at a temperature around 30°C (86°F). In good tempeh, the beans are knit together by a mat of white mycelia.

Under conditions of lower temperature, or higher ventilation, gray or black patches of spores may form on the surface — this is not harmful, and should not affect the flavor or quality of the tempeh. This sporulation is normal on fully mature tempeh. A mild ammonia smell may accompany good tempeh as it ferments, but it should not be overpowering. In Indonesia, ripe tempeh (two or more days old) is considered a delicacy. 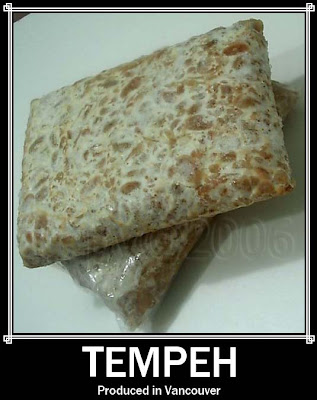 I know that some Asian or health stores in few Canada’s big cities sell tempeh, but since it’s not lots Indonesians in Winnipeg, it’s not easy for me to find tempeh for purchase. If I wanted tempeh a year ago I should order from Vancouver or Toronto, where lots Indonesians live in. Couple days ago, I went to my favourite oriental store, Dong Thai. I saw frozen tempeh in that store freezer. I was so excited and happy, it had been more than a year I was waiting for that tempeh is available to purchase in Winnipeg.
This store sells two different packages of tempeh, one is with a tag inside the package and it’s produced in Ontario and another one without a tag is produced in Vancouver. I did try both of those tempehs and it came to my conclusion that the Vancouver’s produced tastes better and there some places in Vancouver or British Columbia that produced tempeh, but not all of them produced a good tasted tempeh.