Yay! Finally, I can join with you all guys to cook together virtually. Masak Bareng Yuuk means Let’s Cook Together. This event was developed by Ayin of AG’s Food, Deetha of …Mlebu Pawon…, and Shinta of Berkreasi di Dapur Mungil.

This month theme is Tom Yum Goong, the famous sour and spicy Thai prawn/shrimp soup. In this event, I enhanced the Tom Yum Goong with Freshwater Prawns (Indonesian: Udang Galah) as Bee of Rasa Malaysia suggested where she got the recipe from another foodie native Thai, Chez Pim. Followed her aunt recipe, Nam-prik Pao (Thai chili paste) has been added as well as Pak Chee Farang as the reference from Austin Bush, an American Photographer who currently resides in Thailand.

Pak Chee Farang is known as Sawtooth Coriander in English and Walangan or Daun Ketumbar Jawa in Indonesian.  It is used for lalapan (fresh veggies) to company steamed rice, sambal and the protein source. 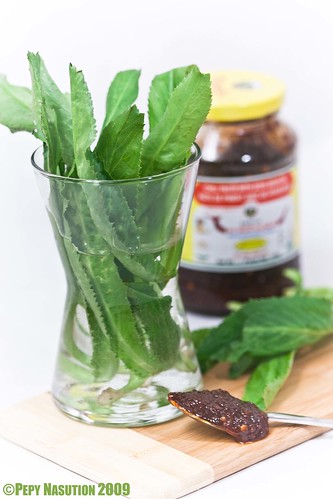 Directions:
Preparation to make the stock:
1. Rinse all prawns.
2. Peel the heads and shells of 2 prawns, reserve them.
3. Squeeze the fat out from the heads and reserve in a separate bowl.
4. Combine 2 headless and skinless prawns with 3 other full body prawns in another separate bowl.

Make the Stock:
1. Heat the shells, heads, in a pot with the water.
2. Bruise the kaffir lime leaves and smash the lemongrass and galangal a bit and throw them into the pot.
3. Reserve a few kaffir lime leaves, a slice or two of galangal, and some lemongrass for the soup later.
4. After the water come to a full boil, lower the heat to simmer and continue to cook for about 5 minutes. Strain, crush the shells and heads well to squeeze all the delicious taste from them.

Tom Yum Goong:
1. Heat the stock to a boil, add king oyster mushroom and the full body prawns, cook for 10 minutes.
2. Add the headless and skinless prawns, prawn fat, shittake mushrooms, and the rest of the kaffir lime leaves and lemongrass.
3. When the prawns are just done (take care not to overcook the shrimps), turn the heat off. Season with fish sauce, lime juice, sliced bird eyes chilies, Nam-prik Pao, and sliced pak chee farang.

Note:
* Throw extra whole chillies, so you can smash them up if you like hotter taste. In case, you serve for other people, this way everyone can control the heat. The taste should be sour, salty, hot, with a slight sweetness at the end.
*Just like other Thais, I enjoyed this with steamed white rice.