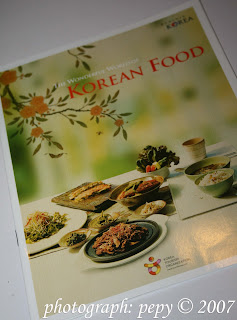 I specifically used Indonesia for my blogspot, but it doesn’t mean I have to post all about Indonesian culinary. I sometimes post other countries’ culinary. Since I’m a big fan of Korean food, and I had a chance to volunteer at Korean pavilion of Folklorama 2007, I got more knowledge about Korean culinary.

Korean traditionally believe that the taste and quality of food depends on its spices and sauces, the essential ingredients to making a delicious meal. Therefore, soybean paste, soy sauce, red pepper paste and kimchi are some of the healthiest and the most important staple food in a Korean household.

Red Hot Peppers
Korean Food is never the same without red, hot peppers. Hot peppers are the main ingredients of gochujang (red pepper paste) and the required ingredient in several casseroles and side dishes. The components in peppers, which gives them their spicy taste, helps to relieve pain and breaks down fat, making red, hot pepper an ideal dietary food.

Gochujang
Gochujang (red pepper paste) is made from dried peppers, salt, water, feremented soy beans and sweet rice powder. These ingredients are mixed throughly and then fermented, which enhances the spicy flavor of this sauce. People typically eat rice mixed with this spicy paste and sesame oil. They also use it as a dipping sauce for fresh vegetables. You can see the picture of Gochujang at http://indonesia-eats.blogspot.com/2007/07/korean-style-spicy-salmon-grilled.html.

Soybean
Soybean is the main ingredient of doenjang (soybean paste) and contains various nutrients, including protein. Soybean is also high in enzymes, which aids in preventing cancer and Vitamin E, which lowers cholesterol level. Soybean can be cooked with rice, grounded into bits or flour, or made into tofu (dubu in Korean).

Doenjang
this soybean paste has been popular among Koreans for over 2,000 years. The ingredients consists of soybeans, salt and water, which are combined with natural elements, such asa sun and wind. Doenjang has been scientifically proven help prevent cancer. People from all over the world come to Korea to enjoy this soybean paste. It is used in casseroles or mixed with fresh mountain herbs.

Ganjang
Ganjang (soy sauce) is made through the same process as soybean paste. Water and salt are added to soybeans and then fermented for two months. During fermentation process, amino acids and lactic are released, which creates soy sauce. Ganjang is used in casseroles and soups. It can be used as a a dipping sauce for various fried foods.