Poutine (Quebec French pronunciation: putsɪn) is a diner staple which originated in rural Quebec, in the late 1950s. According to wikipedia, several Quebecois communities claim to be the birthplace of poutine. Now, this savoury dish can be found across Canada.

Poutine has become staple menu at the national fast food chains such as New York Fries, and Harvey’s as well as in small “greasy spoon” type diners. International chains like McDonald’s, A&W, KFC and Burger King also sell mass-produced poutine in Canada. It is also very common dish sold and eaten in high school cafeterias in various parts of Canada along with fries and pizza.

As of July 13, officially I have stayed in Canada for 5 years. It doesn’t mean I consume it almost every week :-P. In my 5 years of staying, I have only eaten about 2 or 3 times.

The poutine above was bought from Daly Burgers. Daly burgers was famous of its burger with chili in it. I have been knowing that the place is on Corydon and this year they open up the second branch on Pembina.

As you can see below the picture of Daly burgers with chili in it and I ordered the chili on the side as well. The burger patty was fresh made daily. I ordered them for take out and was able to manage eating the chili the next day. 🙂 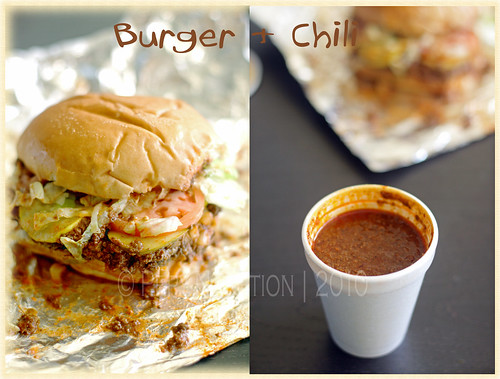