Yay, orange’s season is still in the air! I realized I only bake with orange as the ingredient every December or January. In 2006, I made Orange Soufflé and this January 2008, I made two dishes, Cashew Orange Biscotti and Orange Angel Loaf Cake. 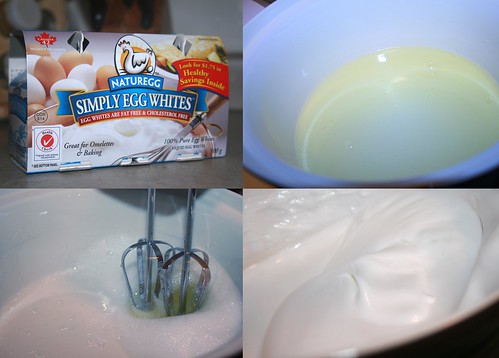 As a recipe of Pandan Angel Loaf Cake that I posted here, it’s also modified recipe from “Sugar” by Anna Olson. This Orange Angel Loaf Cake had been made twice. First time, I used flour and sugar as much as the recipe noted and also added 1/4 cup of orange juice and 1 teaspoon of orange zest. The result, it tasted too sweet. At the second time, I modified by adding more flour to 2/3 cup, reducing the sugar and adding squeezed orange and orange zest as much as the first trial. 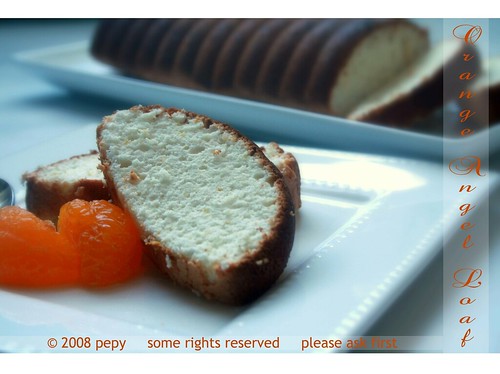 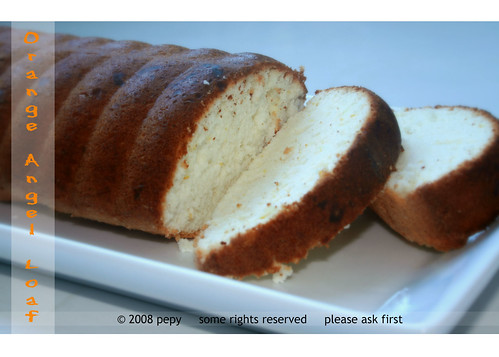 Whip egg whites with cream of tartar and salt until they are foamy. Gradually pour in 7 tbsp of the sugar while whipping and continue to whip until whites hold a stiff peak (they should stand straight when batters are lifted).

Stir in orange juice and orange zest. Fold flour and sugar sifted into whites gently but quickly in 3 additional.

Scrape batter into an ungreased a half loaf pan and run a knife through batter to remove any large bubbles.

Bake 20 to 25 minutes, until a tester inserted in the centre of the cake comes out clean. Invert pan and let cake cool completely*.

* The best way to cool a cake in a loaf pan upside down? Place the loaf pan in a large bowl, so the pan sits without the cake touching the bottom 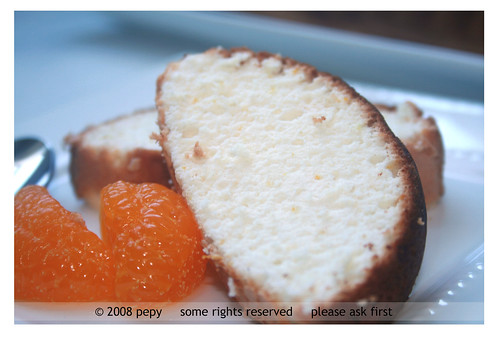