Here are several names of the type Indonesian-Chinese Food:

Back to my story of mie ayam jamur,  I might eat this at least once a week when I still lived in Bogor. Friends and I used to go to Suryakencana area to buy Mie Ayam Tasik. But, there are many different favourite places to eat mie ayam in Bogor, not only at the Mie Tasik; Taman Kencana (Taken), Pasar Anyar, Sido Mampir etc.

Mie ayam jamur or chicken mushroom noodle doesn’t only contain noodle, chicken and mushroom. It has many things to complete on the side such as bakso (meatballs), pangsit rebus (boiled wontons), pangsit goreng (fried wontons) and sliced tripes.

Moving to Canada and no Indonesian restaurant in town, I have to put more efforts in order to satisfy my taste and craving-ness for mie ayam. I usually buy a whole chicken; the skins and fats are used for making chicken oils, the meat is for stir fry chicken mushroom and pangsit filling, and the carcass is for making broth. Pretty much, you will use up everything. 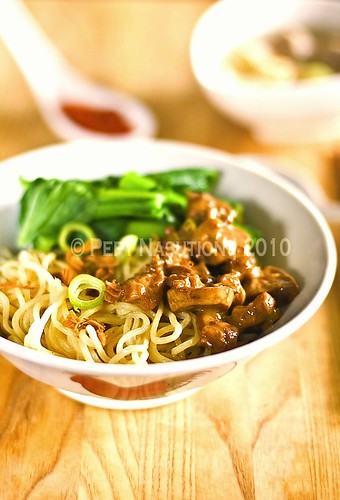 Directions:
Stir Fry Chicken Mushroom:
1. Combine 1 tbsp mushroom soy sauce, chicken pieces and ground white pepper; stir well. Add 1 tbsp tapioca starch and mix well. Set aside.
2. Stir fry garlics and ginger until fragrant. Add seasoned chicken pieces. Stir frequently to let the aroma of ginger and garlic stick to chicken and cook until chicken changes colour.
3. Add mushrooms, the rest of mushroom soy sauce, kecap manis, broth/water, salt and ground white peppercorns. Cook until seasoning is absorbed and chicken is cooked. Set aside. There might be a small amount of broth left in the cooking, so we can use up for assembling the noodles later on.

Chicken Broth:
In a large pan, add water and bring to a boil.  Add all other ingrdients.  Cook at high heat and reboil.  Once it’s boiled, reduce to low heat and continue cooking until the next 30 minutes.  Remove from the heat, drain and broth is ready to use.

How to Assemble and Serve 1 Portion of Chicken Mushroom Noodle:
1. Prepare two bowls; one is big and another one is smaller size.
2. Reboil bakso and steamed/boiled pangsit with broth. Place them in a small bowl.
3. In a big bowl, combine 2.5 tbsp chicken oil, 2.5 tbp light soy sauce and a dash of ground white pepper. Add 1 portion cooked ramen and mix well. Place blached yuey choy and stir fry chicken mushroom. Sprinkle tongchai and green onions over. Garnish with fried pangsit. In this picture, I forgot to put the fried pangsit.
4. Serve those two bowls with sambal bakso on the side.

The way I eat:
I pour some of the broth from a small bowl into a big bowl.  Add sambal bakso and mix well with my chopsticks.