Dhi of Cooking Etcera has made me craved for something with Petis which I used to have almost everyday while I was still in Sidoarjo, the city of Petis. A number of dishes in East Java province are enriched with Petis. Sidoarjo is one of the East Java cities that is used ample petis.

As a person who grew up in East Java, I know 3 variants of Petis. Petis Udang (Shrimp Paste), Petis Kupang (Tiny Shellfish Paste) and Petis Ikan (Fish Paste). I am very familiar with Petis Udang and Petis Kupang rather than Petis Ikan. Petis Ikan is well-known in Madura island (a small island in East Java province). Unlike Terasi or Belachan, Petis has a darker colour, gooey texture, stronger and richer flavour. 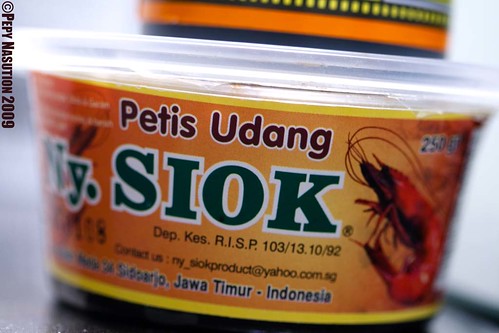 I still remember, when I was in elementary school. We went to canteen and bought kerupuks (Indonesian crackers) that were cooked with hot sand not fried with oil. The kerupuks were enjoyed with Petis Kupang sauce. We use petis for salad dressing mixture, dipping sauce of any fritters such as tofu, tempe, bakwan shrimp and vegetables fritters, and other Eastern Javanese dishes. Krengsengan Kambing is one of them that can be translated as Eastern Javanese Stewed Goat. About two years ago, I posted Krengsengan Daging, another style of Krengsengan with beef as the meat.

Directions:
1. Marinate goat with sweet soy sauce and petis udang for 15 – 30 minutes.
2. Heat oil in a skillet over medium heat, add gound/pureed mixture, saute until fragrant. Add goatt, stir thru until the goat stiff and add broth. Cover the skillet with lid and cook in medium heat, stir occasionally until the meats are tender and the water almost evaporates.
3. Uncover the skillet, keep stirring until the oil of meats come out.
4. Add red chilli peppers, stir until soft. Remove from heat and serve with warmed rice.

Cook’s Note:
To get faster cooking process and tender meat, use pressured cooker.