This recipe was adapted from Krengsengan Kambing which is translated as Sliced Goat in Petis Sauce. Petis Udang means Shrimp Paste in English. Don’t get confused with Patis (Tagalog term for fish sauce). 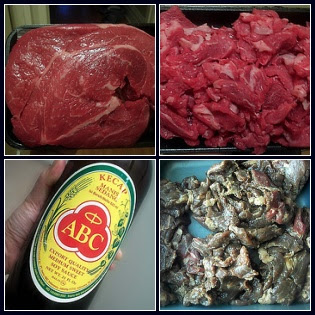 Several Eastern Javanese recipes call for Petis. They can be for Petis Udang, Petis Ikan (Fish Paste) or Petis Kupang (I have no idea what the English term for Kupang). I grew up in a small city next to the capital city of East Java province (Surabaya), Sidoarjo. Sidoarjo is very popular with Fish and Shellfish products, such as Petis and Kerupuk (Chips). 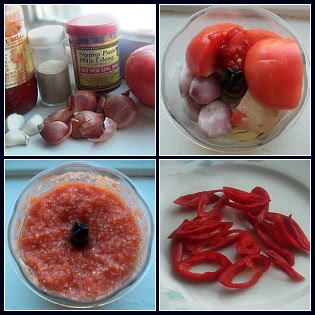 Directions:
1. Marinate meat with sweet soy sauce and petis udang for 15 – 30 minutes.
2. Heat oil in a skillet over medium heat, add pureed mixture, saute until fragrant. Add meat, stir thru until the meat stiff and add water. Cover the skillet with lid and cook in medium heat, stir occasionally until the meats are tender and the water almost evaporates.
3. Uncover the skillet, keep stirring until the oil of meats come out.
4. Add red chilli peppers, stir until soft. Remove from heat and serve.

PS: Use less red chillies and bird chillies, if you don’t like hot taste.
Tips: Beat the meat with a meat mallet before slicing/cutting to tenderize