I am so happy to have Shulie on Indonesia Eats. For those who read this blog regularly must know Shulie of Food Wanderings, a talented foodie blogger with very unique culture background.  I was her blog guest post on April with my vegan easy sweet recipe, Jemblem/Misro/Pulung-pulung Ubi (Indonesian Cassava Fritters).

I’m always curious what other people from different culture eat. Shulie is an Indian descendant who was born and raised in Israel before moving to the US.   For me learning about kosher diet is also interesting, kosher is very close to what Muslims follow, halal.  Kosher and halal followers don’t consume pork.  I found kosher is more specific to what parts of animal that can eat or not. I’m not going to explain furthermore as you can read the details on wikipedia. Anyway, I have been seeing a recipe of Challah lots. So excited to tell you that Shulie will present her pretty Challah (read: KHAH-lah, HAH-lah)!. Please welcome her with Honey Challah (חלת דבש).

In this part of the world Challah is a household name just like Oy and the term Kosher as in the expression ‘is this kosher?!’ (Is it legit?!) so to my delight when Pepy asked me to be a guest on Indonesia Eats and post something ethnic, the first thing that came to mind was a challah. As it might be popular here, perfect aged for French toast or bread pudding this Jewish traditional staple might not be that well known in other parts of the world. I sang Pepy’s praises in my post Blog Awards and Happy Year of the Rabbit and her guest post Indonesian Cassava Fritters (Jemblem/Misro/Pulung-Pulung Ubi) on Food Wanderings. I thank my friend Pepy for having me over at her beautiful site Indonesia Eats.

As challah is part of Friday night ‘Kabalat Shabbat’, welcoming the Sabbath at sundown Friday night family gathering ritual. I believe growing up in Israel there wasn’t one household, religious or secular, who didn’t have a challah or two at their dinner table Friday night. Baguette just wouldn’t be the same. You pray over the Shabbat candles, challah, break bread and proceed to have dinner. Family and resting time!

I like my dressed up Rosh HaShana (Jewish New Year) honey challah for my Friday nights. Given that often than not Friday night dinner’s main dish is non vegetarian, I kept this challah Parve, non dairy, to avoid mixing milk and meat during the meal. It comes out so authentic, gorgeous inside out, soft and moist. This is a widely popular recipe in Israel. Makes two challahs. I like it honeyed and sweetened even to dip into spicy cooked tomato salad called Matbuha or a Moroccan spicy fish called Harayme. Although the challah is ever so slightly sweet it’s a wonderful contrast and compliment to savory Friday night meals.

I would like to take this opportunity to wish Pepy a Happy Birthday on her forthcoming birthday on May 10. Hop over to Pepy’s site Indonesia Eats for the recipe.  It’s a keeper! 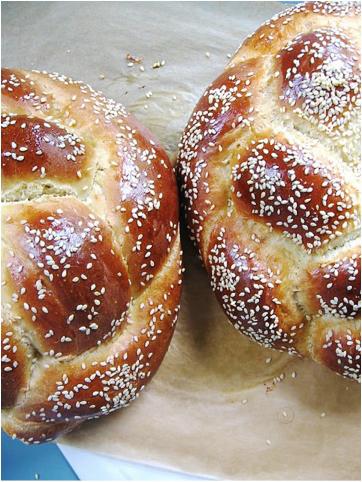 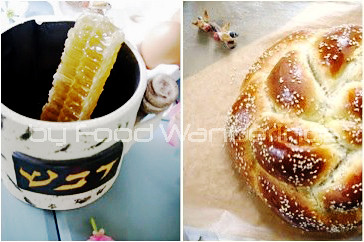 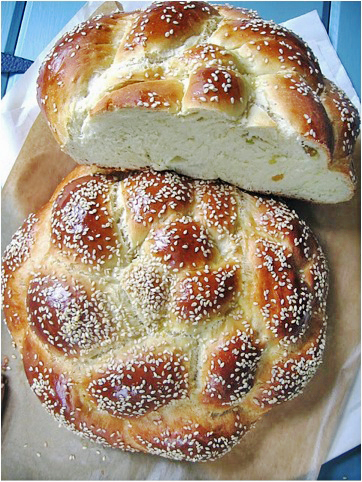 Directions:
In a mixer, with a dough hook attachment, add the flour and dry yeast. Mix until blended. Add the rest of the ingredients besides the last three (raisins, egg wash and sesame seeds). Mix on low speed for 12 minutes until dough is incorporated. Take dough out of mixer bowl, form into a ball and coat with a light film of canola oil. Put back into mixer bowl, cover with plastic wrap and let sit in a cool place until doubles in size, about an hour.

Take dough out and cut into six equal parts, three parts for each challah. I didn’t flour surface but if you find it necessary, flour just slightly. You are now working with only three parts, the other three put back into mixer bowl and make sure they are covered with plastic wrap. For the first challah without the raisins, punch the air out of each of the three parts of the dough and roll out into a 20 or so inches long cylinder each.

Pinch three cylinders at one edge and braid challah brain. Pinch the other side once you are done braiding and tuck pinched sides underneath challah at each edge. Roll braided challah gently like a snail into a round challah shape. Tuck the outside edge under the round challah gently.
Transfer to a parchment lined cookie sheet, cover with plastic wrap and let double, in a warm place, about an hour or less.

Pre-heat an over to 350F. Beat and egg and brush risen challah with the egg wash, sprinkle with sesame seeds and bake for 35 minutes or until golden. In my oven it took exactly 35 minutes. Ovens may vary.

For Raisin Challah:
Punch air out and roll into three cylinders the remaining dough then flatten rolled cylinders, sprinkle golden raisins along the surface and roll again into cylinders. From this point on continue following directions as written for regular honey challah.