March 23, 2010 Update: This post was featured on March 23 FoodBuzz Top 9
Gule is sometimes pronounced differently as gulai. In Indonesia, curry based foods can be named gule/gulai or kare/kari, depend on the area.

This time, I chose making the Surabaya style, Gule Kambing Kacang Hijau (Goat Mung Bean Curry). There is an area which has Middle East/India predominant in Surabaya. It’s called Kampung Arab (Arab Village) Sunan Ampel. This area is very popular with its Gule Kambing Kacang Hijau and Roti Maryam. There is a small restaurant that has been opening since 1960s for these two foods.

At glance, roti maryam (Surabaya), roti cane (Sumatra), roti canai (Malaysia), and roti prata (Singapore) are looked alike. It is said also that these 4 rotis are still related to North Indian Paratha or even Porotta of Kerala, South India. Basically, they are made from flour, egg, butter/fat/ghee.

Especially in Indonesia, Java partcularly, roti maryam is often being identified as Middle Eastern food instead Indian. While in Sumatra and Malaysia, it’s called cane or canai. It’s believed that the name is derived from Chennai, a city in India which is formely known as Madras. In Sumatra (esp. Aceh, North Sumatra and West Sumatra), roti cane is served to company gulai or kari too.

Lately, in Java roti maryam doesn’t only enjoy with gule, but it is sprinkled with grated cheese, chocolate sprinkle or drizzled with regular condensed milk or chocolate or spread with any jams or butter. 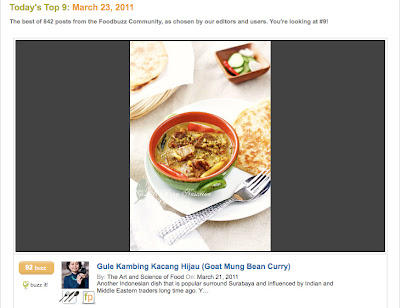 Are you interested to make your own roti maryam? You can find my 2008 post of Roti Maryam. For this post, I didn’t make my own roti maryam. I bought a package frozen roti prata which is made in Singapore. You can buy this package at most Asian stores.

Some Indonesians may ask a question, the original recipe doesn’t include any yogurt. Yes that is right, but I love marinate the goat with yogurt for tenderizing the meat. 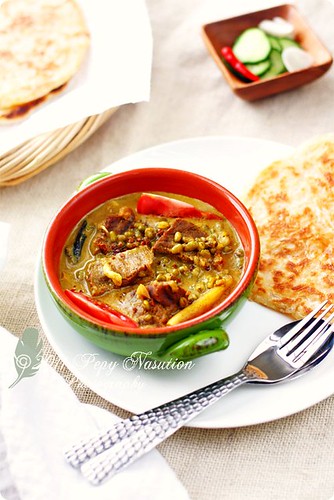 Methods:
Preparations
Before you starting to grind or pound the spices, toast turmeric, candlenuts, coriander seed and white peppercorn or you can broil them in the oven. After broiling turmeric, peel the skin off.

Now you can cut shallot, garlic and root spices into smaller pieces to get easier time to grind/pound. If you don’t have a mortar and pestle, use your food processor.

Meanwhile you are soaking mung beans for 2 hours with cinnamon and nutmeg, you can marinate the goat meat by combining yogurt and 1 tablespoons of spice paste.

After soaking mung beans for 2 hours, transfer to a pot and boil until tender. You do not need to remove nutmeg and cinnamon when you boil them. Drain.

Cooking and Serving:
1. Heat up your your dutch oven/pot and add cooking oil. Stir fry lemongrass, galangal, salam leaves and the remaining spice paste until you can smell their aroma.

2. Add marinated goat meat, stir evenly. Pour thin coconut milk in. Bring to a boil, turn the heat to low-medium and cook the meat until tender.

5. In each serving bowl, ladle gule kambing kacang hijau over. Add tomato pieces and sprinkle fried shallot flakes over. Serve with roti maryam on the side. I myself like adding acar on the side as well.

Cook’s Note:
*Toasted ground cumin can be found at some Indian grocers.
*Kencur powder is sold at Sun Wah supermarket in Winnipeg