Emping or Emping Melinjo is a popular cracker to company Indonesian foods. The crackers have a slightly bitter taste and are frequently served as a snack or accompaniment to Indonesian dishes and made from seeds of Gnetum gnemon (paddy oats, melinjo, belinjo). Melinjo is widely used in Indonesian cooking including the leaves. The leaves and seeds are used for sayur asam (Indonesian vegetables sour soup).

I just got this from Dong Thai, an Asian store that sells lots more of Indonesian products. The one that I have here is the sweetened and garlic flavour one. I quoted what my Indonesian foodie, Indochine Kitchen said on twitter when I told her I just bought one “One of the best Indo snacks!”. To enjoy these crackers, you need to deep-fry first.

A small conversation happened between Dong Thai’s owner and I when I picked up this goodie from the aisle. She was telling me that she has salam leaves in stock again. I told her that I still have mine but I asked her where she stores those packages of salam leaves. So, next time I know.

Do you know why I took the picture of the company’s name? 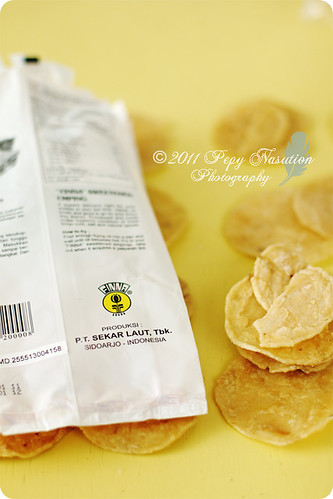 “Finna” is a popular brand of Indonesian crackers. The company mainly produces fish and seafood products as Sidoarjo’s logo is milkfish and shrimp. One of the plants is just cross the street from where I used to live.