Sambal is such a staple sauce in Indonesia, with plenty of different assortments depend on the region. Another variety of sambals from Western Sumatra (a.k.a Minang) is balado. As I grew up with balado, this one was always on my dining table, at least every three to five times a week when I was in my homecountry.

In the first version, I used king mackerel fish (Indonesian: ikan tenggiri), Asian eggplant and petai (known also as sator). However, back then, I didn’t relish petai’s aroma, somehow I do miss petai’s aroma in the balado.

Moreover, the second version came with green asparagus, the vegetable is not common in Indonesia; for, asparagus itself is native to Europe, northern Africa, and western Asia. Let say this version is Indonesian Fusion cuisine.

Mackerel, Eggplant and Petai Balado
modified by me 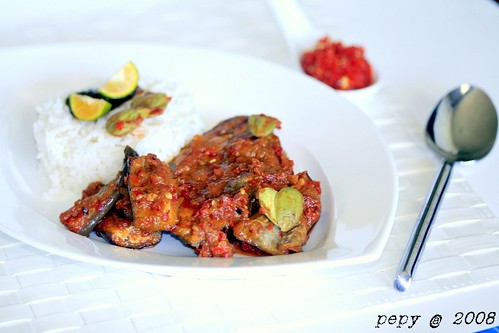 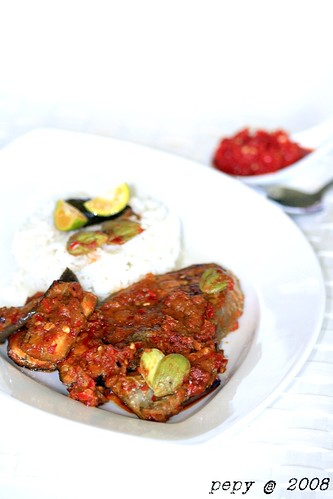 Directions:
1. Marinate fish with calamansi and seasalt for 15 minutes.
2. Meanwhile, at 400F, bake eggplant cut with a small amount of oil for 15 minutes or until soft, but not mushy. Set aside.
3. Grill, broil, pan-sear or deep fry fish until golden brown. Set aside.

Asparagus Balado
modified by me 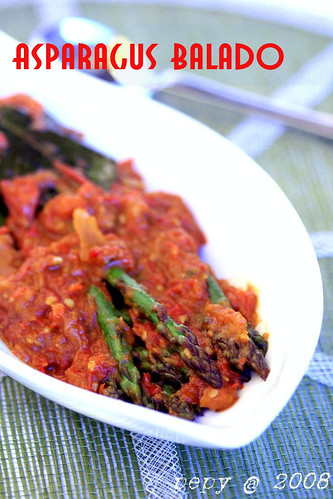 Ingredients:
400 g asparagus spears
olive oil (only if you want to grill them)

Balado Sambal
See the recipe above. 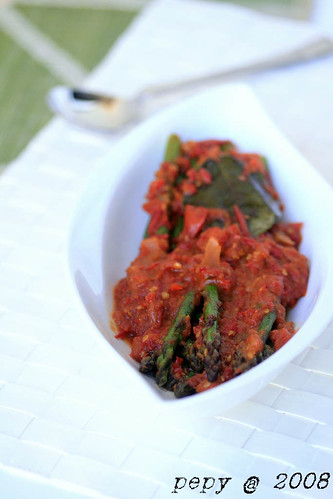 Directions:
1. Asparagus can be grilled, steam or boil. Holding each asparagus spear at base and halfway up stalk, bend just until stalk snaps at natural breaking point. Follow this instruction, only if you want to boil the asparagus. Pour water into large skillet to depth of 1 inch (2.5 cm); bring to boil. Arrange spears in 2 layers in water. Cover and cook for 2 minutes or until bright green and still crisp. Drain; chill under cold water. Drain; set aside on towels. 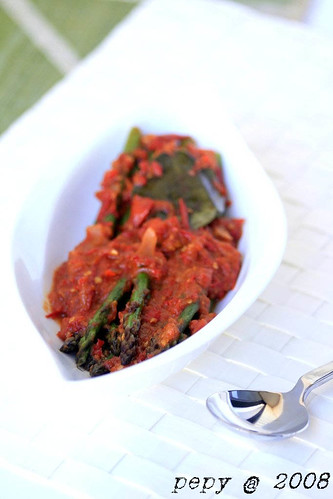