I have posted this article in bahasa Indonesia on goorme before.  I promised to Shulie of Food Wanderings to write the English edition since we have been discussing about kokum on twitter quite some time.  It’s not like my usual post that I have a picture at the beginning of the post.  This time, pictures will be on the bottom part.  Shall we move on to the main topic “Tart or Sour Flavourings in Indonesian Cooking”.  The word “asam” in Indonesian means sour. WARNING: this post will be a longer one!

Asam Gelugur (Garcinia atroviridis)
The dried fruit pieces are widely used in Sumatra cooking such as Minangkabau and Malay cuisine.  As our neighbourhood country that is populated with ample Malay descent, Malaysian cuisine has an influence from Sumatra that applies asam gelugur for some of their dishes.  The Malaysian pronounces it asam gelugor or asam keeping.  In Thailand, this fruit called om khaek or som mawon
Being a part of Garcinia family, the dried fruit has been claimed to help reduce weight and cholesterol level beside giving a tart or sour taste.

Tamarind (Tamarindus indica)
Tamarind is a tree in the family Fabaceae. The genus Tamarindus is monotypic (having only a single species).

Although native to Sudan and tropical Africa, it is Mexico and Asia that are the largest consumers and commercial producers of tamarind.  The tamarind has also long been naturalized in Indonesia, Malaysia, the Philippines, and the Pacific Islands.  Thailand has the largest plantations of the ASEAN (Association South East Asian Nations) countries, followed by Indonesia, Myanmar, and the Philippines.

It’s known as Asam Jawa in bahasa Indonesia and the most common ingredient for enhancing a tart or sour taste in Indonesian cookery. Many dishes are added by tamarind such as sayur asam (Indonesian vegetable sour soup) and cuko (tamarind sauce) for pempek Palembang (Palembang fish cake).

Tamarind is harvested by pulling the pod from its stalk.  Asian markets usually sell tamarind in whole pod, pulp and paste form.  Tamarind is not only for enhancing flavour of the food but it also can be for beverage, jam and soft candy.

In Java, a mix of tamarind pulp, turmeric, coconut sugar and water is considering an herbal drink (jamu) for women who are on period.  This jamu believes helping women to scent, refresh and streamline the body if you are diligent to consume it.

Asam Kandis (Garcinia xanthochymus)
As well Asam Gelugur, Asam Kanids is a family of Garcinia with different species. It tastes bitter and sour.   The very popular Rendang from Minang (West Sumatra) needs asam kandis to give a darker colour look.   To avoid a quick moldy, store  asam kandis in a tightly sealed container and dry location.

Asam Sunti
Although it’s started the name with asam, asam sunti is not a plant from tamarind nor garcinia family.  Asam sunti is preserved by sun-drying then flattened.  I guess I can translate the name as a sun-dried bilimbi.  From that processing, it’s resulted a blackish brown look. If you are willing to make your own asam sunti, take a look this asam sunti processing step.

Asam sunti is used by grinding or pounding together with other spices.  Along with curry leaves (daun salam koja, daun kari), it’s used widely in Aceh cooking.  Save Asam Sunti in an airtight container in the fridge.

Bilimbi (Averrhoa bilimbi)
This fruit is native to Maluku islands (or better known as the Spice Islands).  The species is cultivated or found semi-wild throughout Indonesia, The Philippines, Sri Lanka, Bangladesh, Myanmar (Burma) and Malaysia. This green small fruit plays an important role in Indonesia and the Philippines culinary. It is a close relative of the carambola or starfruit.

In this post, I include two other ingredients which are still related to Asam Kandis and Asam Gelugur.  They are Garcinia gummi-gutta  and Garcinia indica. 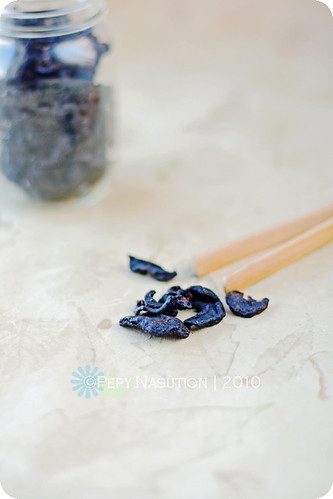 Kodampuli/gorakka mostly used in fish and seafood dishes especially in Sri Lanka and Southern India such as Goa and Kerala. 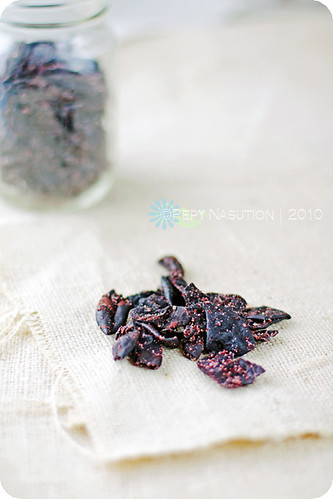 Beside adding Kokum into fish dish, it is added also for a beverage in India just like a tamarind drink in South East Asian countries.

For me who lives outside Indonesia, I have used kokum/kokkam and kodampuli/goraka for substituting asam kandis and asam gelugur.  In Canada, kokkam and goraka can be found at Indian or South Asia grocers.